Spain Guides | Why Do Spanish Live in Flats? Here Are the Main Reasons

Why Do Spanish Live in Flats? Here Are the Main Reasons

As property experts, we’re often asked why do Spanish live in flats? And it’s true that the majority of the people in Spain do indeed live in flats, this is primarily down to two reasons.

So in this post, we’re diving into the reasons Spanish live in flats, starting with a quick takeaway summary for you.

65.9% of Spanish people live in flats because they are more affordable, with reduced living costs, and it is the cultural norm since the mid 20th century, which encourages a sense of community. It is closer to urban centers for commuting and shopping, and vertical development is more economical.

So with the summary in mind, and while you’re choosing your beautiful apartment such as this one, let’s dive deeper into this question...

Why do Spanish live in flats?

Firstly, because flats are relatively less expensive to occupy on a number of fronts. And secondly, because urban development in Spain is such that houses are usually far away from the offices or from urban centers.

Therefore, those who wish to live near their workplace often choose to live in flats rather than houses.

Among all European countries, according to statista, Spain is at the top of the league table in terms of the percentage of flat residents at a very high 65.9%, only followed closely by Latvia at 65%. 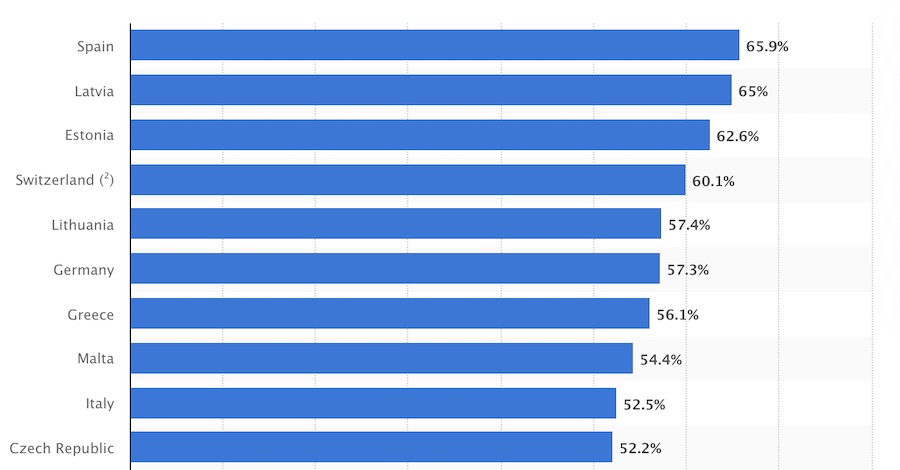 The low supply of affordable houses at prime locations makes flats a preferred choice of two-third of the Spanish population.

Of course, a number of factors come into play, such as economic, social, and historical reasons that are discussed below that have also contributed greatly to this high percentage of flat residents.

Let’s get into Spanish zoning laws so we can better understand the town planning aspects...

There are certain zoning laws in Spain that many believe to be restrictive ...as they put an extra premium on the land that is outside cities where potential residents could build a house.

Therefore, vertical property development is considered far more efficient - and cheaper, as a potential house builder does not need to pay any premium.

If we look at it from the perspective of Spanish property developers, it’s not only easier for them to develop vertically but also much more profitable overall.

Desire to own property

Ironically, a nation with one of the highest percentage of flat residents has actually been historically very fond of owning their own homes.

The home-owning trend actually began in earnest back in the 1960s during Franco’s regime.

During that era, owning a home had much more meaning and status to it. It meant not only that the owner is prosperous, but also that they believe in the importance of the values of a Catholic society.

Moreover, real estate was considered an excellent form of investment ...as there were fewer other or better options to secure your money from losing its value due to inflation.

Thus, flats were the ideal solution to the increased demand for property.

Flats and apartments, in general, fulfilled everyone’s desire for ownership - as well as being a relatively cheaper and more affordable investment. Thus, made making property ownership more affordable to a wider section of the population.

A contrast between times before and after 1950 shows some interesting figures.

Even in recent times, according to studies, 8 out of 10 people own the house in which they live, and this ratio is higher than all other European States by 8.7% on average.

Social aspects of why Spanish live in Flats

Spanish people are considered a very social populace and generally tend to maintain an environment of openness in society.

One benefit of flats is that you get to readily interact with your neighbors on an almost daily basis - which helps develop and encourage a sense of social relationship that cannot be achieved when living in individual dwellings.

Moreover, Offices - or workplaces - are usually in close proximity to flats. This way it’s easier to take time out to meet all of your friends ...even if they do not live in the same building. This is especially so in areas where a majority of the buildings are concentrated in the same area.

This intense sense of community of the Spanish has been best reflected in tough times such as pandemic-related lockdowns.

The images of people singing and appreciating health workers while standing on the balconies of their apartments speak volumes of how living shoulder to shoulder creates a greater feeling of community, closeness, and interconnectedness. 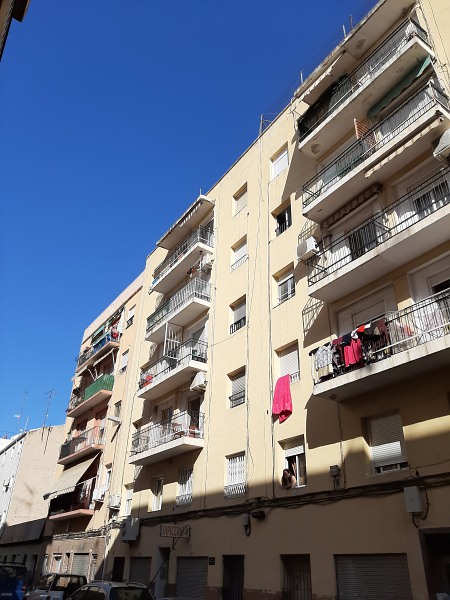 Back in the early 20th century and before, Spain was primarily an agricultural-based economy. It was in the 1950s, the economy began making a shift from an agricultural base to an industrial one.

As a result, people started moving away from rural areas toward more urban living.

However, the cities were not quite developed enough to accommodate such a large influx of people ...and those coming from rural areas were not so wealthy either.

Thus, it was in their best interest to live in flats as they were deemed cheaper than houses and were also located near factories or other workplaces - so transportation costs and commute to work could also be as reduced as much as possible.

Also, historically at that time, the men of the household would work predominantly in factories, and women were the caregivers and dealt with shopping for the home. So, it was much more convenient for them to live in apartments right next to the city center and stores.

You might wonder why after many decades, and now that Spain has become a fairly well-developed country, the concept of flats is still very persistent in Spain.

Which also begs the question, why do Spanish people still prefer to develop vertically when horizontal development is very much possible?

So let’s look at what might be the combined reasons behind these modern development factors?

It is true that the Spanish might have adopted the vertical development model initially because it was the need at the time, but you could argue that it has turned into a natural and cultural choice for them to do continue the practice now.

The driving reason behind this is that flats are generally more resource-efficient and greener when compared to individual houses.

Not only is it that land is optimally utilized ...but many other expenses are also shared and therefore reduced.

So, as the Spanish become more environment friendly and sustainable-aware, the more they’ve grown to favor the concept of ecological construction such as flats.

To most Spanish residents, houses or villas, such as this fine example, have become something of a luxury.

Downsides of living in flats

There’s no doubt that living in flats and apartments suit the Spanish lifestyle and it sounds rather fascinating - and indeed attractive from most outsider’s perspective.

But there can be some downsides as well. And we're not the type of agents to disregard any downsides, so these are ones which as Spanish property experts we often help would-be buyers to be made aware of.

Where on one hand living in flats provides you the benefit of being near to everything and offers an integral community feeling. On the other hand, you might not get any lawn or personal garden space.

Even when it comes to covered areas, space is more often than not less than that of a house.

Flats generate more vibrant neighborhoods ...but on the flip side of this, if you end up living next to a noisy neighbor, it might become a challenge to get a good night’s sleep.

So, in the end, flats also have pros and cons ...like anything else that an individual must assess before making the choice. That's where we can help...

You can avoid all the potential pitfalls, and capitalize on the positives that apartment living in Spain has to offer, provided you gain some expert advice. For that, you simply need to speak to Spanish property experts like us here at 1casa.

With the right help, expertise, and knowledge, we can make your dream home purchase become smooth and trouble-free. With advice on where to purchase, along with taking the trouble out of how to purchase and the processes involved.

Would you like to speak with the author? michael@1casa.com is available to discuss your needs personally, please quote file 3091 Thank you!