Spain Guides | What Are Houses in Spain Made of? Materials, Styles, Features

What Are Houses in Spain Made of? Materials, Styles, Features

Spanish style houses have always been considered very unique, and what distinguishes them from other styles of houses are the materials, and how they're used. So what are houses in Spain made of? Let's get into that now.

Spanish homes were built out of adobe, known as mudbrick. With wooden exposed beam roof supports that often extend to create an outside veranda. Floorboards, tiles, or cement for flooring, thick stucco-clad exterior, red-tiled roofs, inner courtyard, and arches. With tiles or painted lime walls.

But that’s not all that houses in Spain were made of, or are made of now, so let’s get into some more details...

Features of a house in Spain

There are other key features of Spanish houses as well - but with the expansion of architectural designs, those might not now be consistent in all types of houses.

For instance, small windows with bars on the windows are very likely to be present in a traditional Spanish house.

But by contrast, a modern Spanish house might have large windows. So you could say that different types of Spanish houses are made of different materials and characteristics. BUt often modern properties will still incorporate traditional Spanish features. 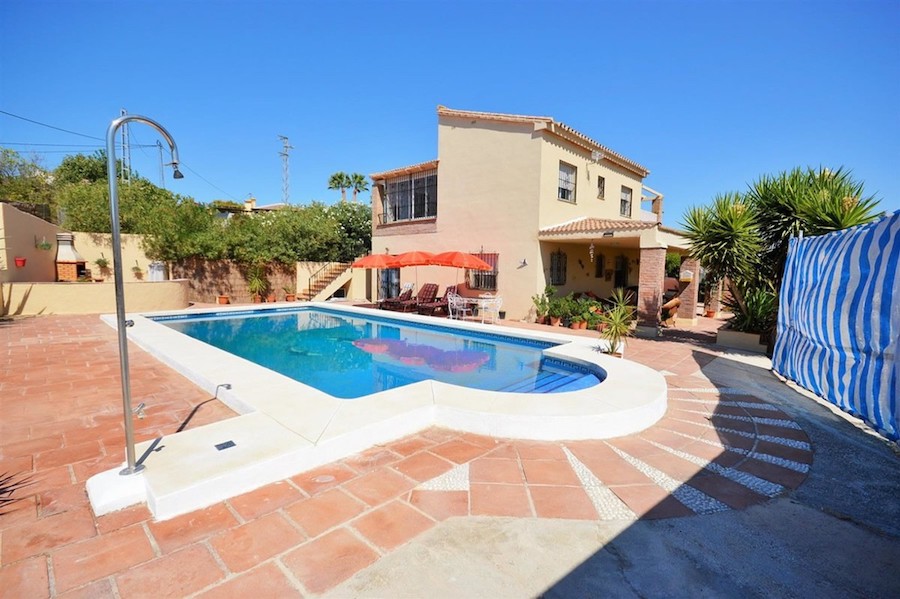 So let’s discuss a few elements that are usually common in all Spanish houses.

Exposed beams not only adds a rustic look but is traditional. This effect is not unique to Spain but has historically been a common method of design. Exposing old beams provides the effect of history and style, as well as adding a cosy theme to the property.

These beams often extend out from the first floor of a property to provide a covered area outside for patio use, which offers shade from the midday sun, or from Spanish rains - and even act as a barrier to the snow in some areas of Spain.

One of the most prominent features of Spanish houses is their sturdy walls ...which are usually finished with a material called stucco - which other countries often refer to mainly as plaster.

Stucco is a combination of cement, water and sand, and commonly painted in shades of white or some earthy tones.

The light colour and textured stucco offers a nice clean look to the house, and makes full use of natural light which historically comes from smaller windows openings - where light can also be impeded by shutters on the windows for these reasons.

White walls also allows any embellishments to pop even more and detracts from features that some properties need such as bars on the windows added because of this.

Some houses in the USA are designed with similar architectural styles in order to revive and capitalize on the traditional Spanish design, When not made of Stucco, exterior walls are made of white bricks if not of stucco.

Some modern builds now adopt a brick format. And of course depending on the type of Spanish property, some will be wholly built with bricks.

Spanish people, on the other hand, have always preferred stucco as a traditional material because it’s simply better suited to the climate of Spain. Ideal for the climate in two main ways...

Flats are a different matter, and there are reasons why this many Spanish people live in flats.

They add a little touch of colour to the house’s exterior while maintaining the overall earthy look. In other words, red-tiled roofs and stucco-clad white walls make a great style combination.

Commonly, roof tiles are made of ceramic, terracotta clay, or concrete. So, they’re not only extremely durable, but also very practical when it comes to areas with more extreme climates.

Like most house builds, the roof tiles on Spanish houses, are still slanted downwards. So water does not seep into the roof  - which improves the life of tiles and roof.

Where flat roofs are used, often these are reinforced against the environment with tiles or concrete layers.

Staying on the subject of what houses are made of in Spain, let’s move on to the outside of spanish properties.

The luxurious look of Spanish houses becomes even more complete with the addition of a central or side courtyard. Community, family and friend gatherings are a large part of Spanish culture. So houses are often built around the central courtyard or in L shape designs.

The open-air and naturally lit space adds a wonderfully natural and ‘outdoorsy’ effect to the inside of a house.

Courtyards can be decorated with lots of adronments, such as a fountain in the centre, borders, or plants in pots along the sides or scented climbing roses. Greenery in the courtyard complements the red roof very well.

An inner courtyard not only brings natural light into the house but also fresh air.

In the modern world where there are huge buildings and developments all around, a little idillic patio space inside the house keeps that hint of nature a little closer.

Moreover, inner courtyards provide a nice cosy location to hang out with family and friends. On chilly nights, one can set up a bonfire and enjoy.

On sunny days, you can sit in the shade and relax. And traditionally, Spanish people shift their cooking activities to courtyards during summer when the kitchen becomes too humid and steamy. 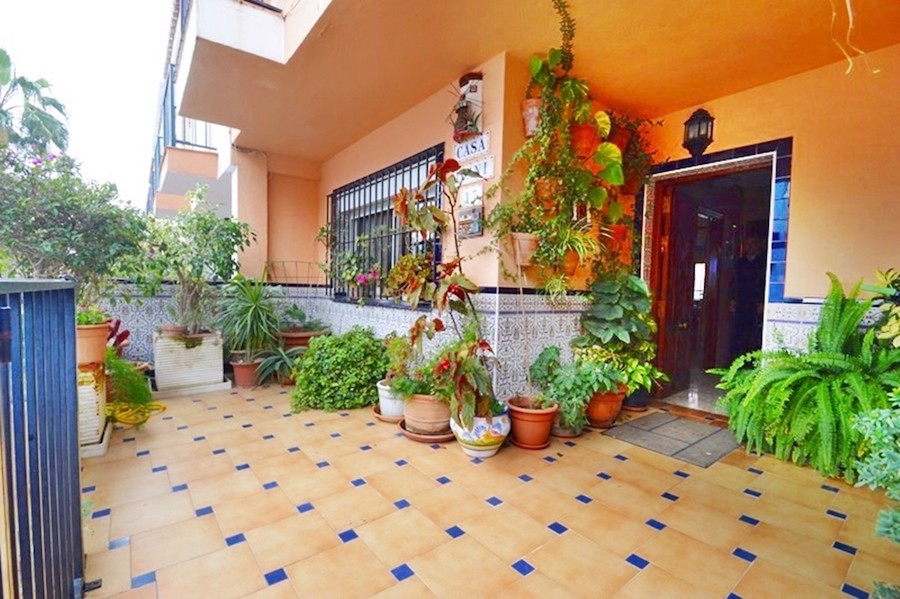 One of the defining characteristics of Spanish architectural designs is the prominent arches and curves in the house as well as in the hallways outside the house. According to Wikipedia, there are around 16 basic arch styles, and it’s fair to say traditional Spanish houses adopt most of them.

Be it windows, doors, or any other entry points or pathways, you can often see many of them are arch-like.

It’s surprising how much such a minor detail can add impact the look of the house and give it a sense of unique style.

Columns are alsop a p[rominent feature of traditional Spanish property. Less so in modern developments due to cost factors. But in some types of houses, you may find large columns and pillars as well as, or instead of arches.

However, both arches and columns serve the same purpose and add to the Spanish aesthetics of the house.

As we mentioned earlier, the attraction of Spanish architectural designs lies in the natural and earthy look of it’s houses.

Just like red-tiled roofs, the wooden support beams accent the stucco white walls. Traditionally, wooden beams were used to support the roof of the house making it even more sturdy. However, in modern constructions, the wooden beams serve more of a decorative purpose than structural.

But in terms of what houses in Spain are made of, wood is not limited to structural purposes.

The traces of wood in Spanish houses are not only limited to beams but the doors and windows are also predominantly made from wood.

The simple wooden adornments around doors and windows completely changes the appearance of the house from ordinary and mundane to stylish and classy.

In most traditional Spanish houses, the windows have wooden shutters on them. Similarly, the shade over courtyards or side gallery is sometimes made of wood. 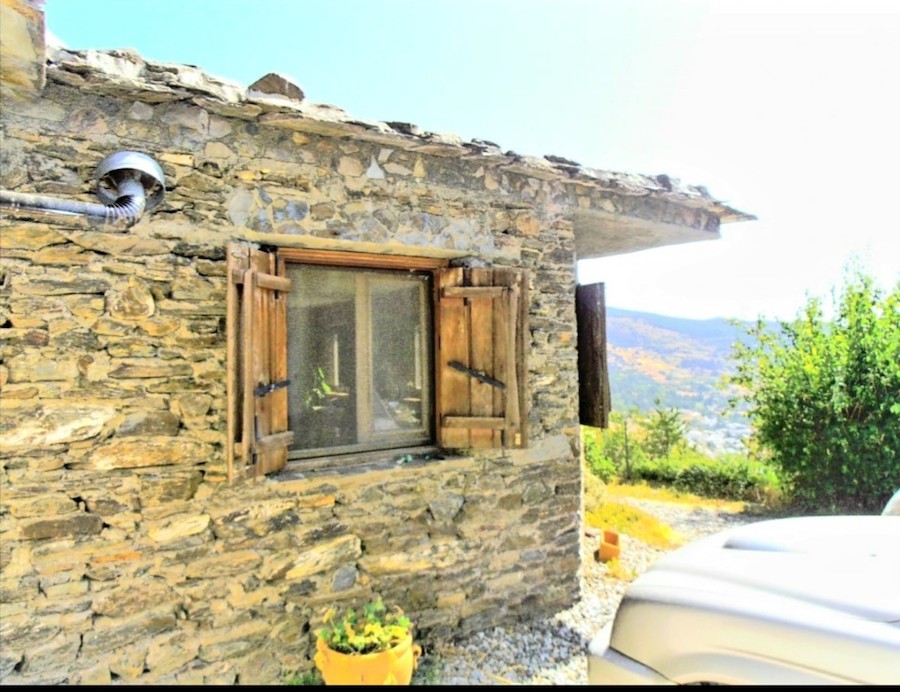 Spanish houses are historically built from indigenous materials and thus, they can vary from region to region, and even from town to town.

Apart from the materials used, some elements are also not necessarily found in all Spanish houses.

To name a few not mentioned in detail above:

Number of stories on Spanish houses

Similarly, traditional Spanish houses used to be single-story, often in rural properties, they may have an area beside or below the property for keeping livestock... that’s how far back some properties go!

But in many places now, contemporary constructions have multiple stories - but that does not make them any less of a Spanish house.

It’s more about encompassing the Spanish culture and the feel that these buildings reflect. Because according to the Spanish belief, buildings are an extension of the surrounding environment and landscape.

There are many other elements that make up a Spanish house - but to sum it up, properties that bring a natural yet cosy and warm element to the house are at the core in Spanish house characteristics.

There can be slight variations from traditional designs to modern or depending on personal preference but the warm minimalistic aesthetic is constant.

This means that there’s always room for customization, and you can design your Spanish house just the way you love it.

”...buildings should be an extension of the

We can help you find your dream home, why not get in touch with us here at 1casa.com and we’ll look to understand your needs and guide you through the process.

We hope this has helped you to understand the types of properties that in Spain that you may be looking for. And of what houses in Spain are made of?

If you’d like to speak with the author, then michael@1casa.com is available to discuss your needs personally, please quote file 3091 Thank you!